As world leaders gather in Copenhagen to seal the deal on climate change, I saw, first hand, the devastating consequences of climate change on Eritrea’s agriculture and livestock sector.

Crop cultivation and animal husbandry account for 60 per cent of rural incomes in Eritrea. Recent models and estimates show that the effects of climate change have an adverse impact on the country’s agriculture and livestock sector. Decrease in rainfall and a rise in temperatures has resulted in increased dry spells and decreased soil moisture. 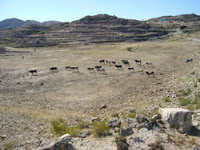 Water scarcity is one of the many challenges that farmers and pastoralist face in Eritrea. The country has two perennial river systems, the Setit River, which forms the country’s border with Ethiopia and drains into the Nile basin, and the Gash Barka system, which collects the run-off water from the highlands. All other rivers in the country are seasonal and carry water only after rainfall, which means that they are dry most of the year. The country has limited sources of fresh surface water, and although groundwater can be tapped, it may be s quantity and quality may be poor.

Official estimates show average annual rainfall at 400-500mm. However, for the last two years, average rainfall has not exceeded 100mm. 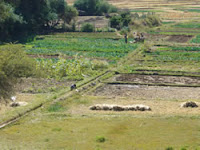 To counter the devastating impact of climate change and to ensure food security for its people, the government of Eritrea is investing in the agriculture sector by: 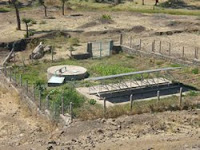 For example in Zoba Debub the livelihoods of 82% of the 750,000 people living in this zoba depends on agriculture and related activities. Farmers in Debub like in Ma’ekel and other areas of Eritrea plant cereals such as wheat, barley, sorghum, taf, millet, maize and also vegetables – tomato, onion, carrot, potato, cabbage, lettuce and pepper. 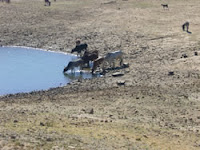 In drought-prone Eritrea, livestock is a farmer’s most valuable asset. Animal husbandry is not only one of the main sources of livelihood for farmers, but it is also a form of insurance that enables poor rural people to cope with drought and other disasters.

One of the many challenges facing Eritrean farmers and pastoralists is to find grazing land and water for their livestock. The reservoirs and the surroundings provide an invaluable source of water and grazing land for livestock.

If you’ve ever visited Eritrea, you will be familiar with its arid landscape. You can imagine my surprise when driving through zoba Ma’ekel and -zoba Debub, against an arid and dry landscape, literary out of the blue I saw a beautiful body of water surrounded by hectares of emerald green and lush vegetation. These mini-oasis which are the result of Eritrean government’s investment in agriculture are THE source of livelihoods and food security for poor rural Eritreans. 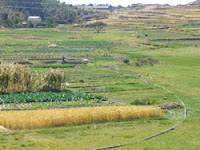 The reservoirs can hold anywhere between 50,000 to 350,000 m3 of water and serve 200 to 350 poor rural households who are now able to irrigate their 15-35 hectares of agricultural land. Furthermore, the reservoirs and dams provide a secure source of grazing and water for livestock and also source of water for domestic/washing purposes.

These secure source of blue gold allow farmers to complement their rain-fed crops - cereals, sorghum and barely - with vegetables such as tomatoes, lettuce, cabbage, carrots, onions and pepper. 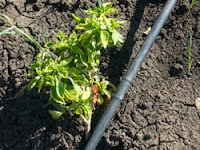 Eritrean farmers use a variety of irrigation methods ranging from drip to pipe and sprinkler and religiously adhere to the agreed irrigation schedule. Thanks to a favourable government policy, they have the luxury of not paying for water. However, they pay an average of 10,000-15,000 nakfa for a pump and those who have a fuel-run pump benefit from subsidized fuel.

The farmers are cognizant that their livelihoods depends not only on water, high yielding seeds and high-value crops but also on making sure that their pumps are well maintained. To this end they’ve established a revolving fund which is used exclusively for this purpose. 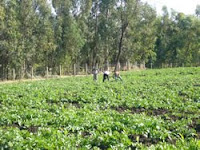 “Thanks to the reservoir now I have a secure source of water and can irrigate my 0.25 hectare”, says Woldo a farmer living in the Shmangus-laalay village. “Now I have three crops instead of one.” Woldo uses a combination of sprinkler and water pump. “When my crop was germinating, I used water pump, because sprinklers can damage the crop”, says Woldo. Woldo’s water pump is run by electricity for which he pays 24 nakfa per hour.

The 350 households living in the vicinity of this reservoir use this body of water not only to irrigate their plots, but also for their livestock and for domestic purposes such as for washing. 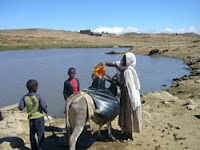 Before the reservoir was built, Elsa a mother of three, used to wake up at crack of dawn to go fetch water for washing purposes. Today, in tow with her donkey and her youngest son, she goes to the lake to collect water. While the water collecting technique may be rudimentary, it has saved Elsa hours of walking, allowing her to spend more time at home and to get involved in agricultural activities. 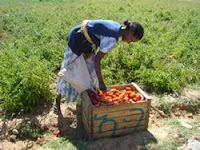 In the nearby village of Tesazege village, Athaneta and her brother are cultivating 0.5 hectare of land using the nearby reservoir. “I practice crop rotation and for this crop cycle I’ve replaced barley with tomatoes, because I have a secure source of water”, says Athaneta with a smile. “I’ve already harvested 100kg and expect to harvest another 200kg which I sell for 2 nakfa per kilo”.

“Thanks to this secure source of water, my brother and I can be sure to have one cereal crop and two vegetable crops”, says Athaneta.

Habtemariam is a model farmer who has fully taken advantage of the nearby reservoir and exploited the potential of his 0.75 hectare land, managing to secure himself and his family a total 5,000 nakfa by planting cabbage, lettuce and carrot. 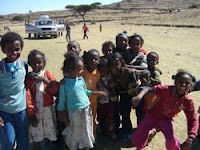 Eritrea has the potential of having many more lush, green-emerald mini-oasis allowing more farmers to systematically cultivate agricultural land, ensure their food security and earn a secure income.

The Eritrean government and donor agencies are investing and committed to invest more in agriculture. Now, the onus is on the world leaders gathered in Copenhagen to finally seal the climate change deal, so that Eritrean women, children, men, farmers and pastoralists can have a bright future and never again suffer from drought and famine. 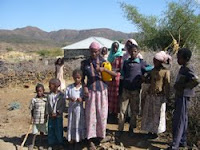 Please sign the climate change deal so that these children and this Eritrean family and many more have a better and brighther future!

Good for them, they should be assisted to come up with their local solution.

Cool website, I had not noticed rsamii.blogspot.com earlier during my searches!
Continue the superb work!

Wow neat! This is a really great site! I am wondering if anyone else has come across something
similar in the past? Keep up the great work!

This is a message for the webmaster/admin here at rsamii.blogspot.com.

Can I use part of the information from this blog post right above if I provide a backlink back to your website?

In answer to Anonymous comment linking to this blogpost - the answer is yes, may do so. Regards