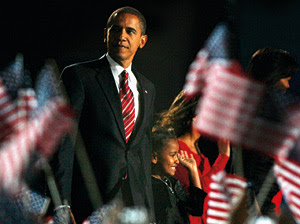 Senator Obama's election as the 44th President of the United States personifies the President's elect slogan "Yes we can". Now the entire world has realized that indeed nothing is impossible. Over the last decades we've seen a lot things that we thought were impossible, such as the fall of the Berlin Wall, how new technology and new ICTs have revolutionized our lives. Now we see an African-American as the President of the United States.

All of this shows that "when there is a will there is a way" and indeed making things happen depends only and solely on us. We as individuals are responsible for building and destroying.

So hopefully after this historic election, humanity will embrace the slogan YES WE CAN to continuously innovate and build a better world.
Posted by Unknown at 08:12